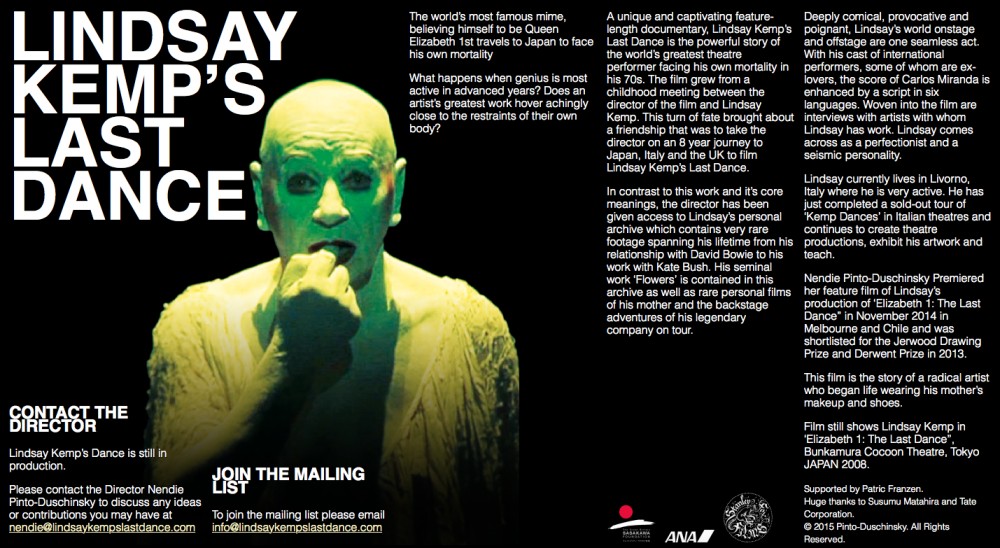 The world’s most famous mime, believing himself to be Queen Elizabeth 1st travels to Japan to face his own mortality.

What happens when genius is most active in advanced years? Does an artist’s greatest work hover achingly close to the restraints of their own body?

A unique and captivating feature-length documentary filmed over the last 8 years, Lindsay Kemp’s Last Dance is the powerful story of the world’s greatest theatre performer facing his own mortality in his 70s. The film grew from a childhood meeting between the director of the film and Lindsay Kemp. This turn of fate brought about a friendship that was to take the director on an 8 year journey to Japan, Italy and the UK to film Lindsay Kemp’s Last Dance.

In contrast to this work and it’s core meanings, the director has been given access to Lindsay’s personal archive which contains very rare footage spanning his lifetime from his relationship with David Bowie to his work with Kate Bush. His seminal work ‘Flowers’ is contained in this archive as well as rare personal films of his mother and the backstage adventures of his legendary company on tour.

Deeply comical, provocative and poignant, Lindsay’s world onstage and offstage are one seamless act. With his cast of international performers, some of whom are ex-lovers, the score of Carlos Miranda is enhanced by a script in six languages. Woven into the film are interviews with artists with whom Lindsay has work. Lindsay comes across as a perfectionist and a seismic personality.

Lindsay currently lives in Livorno, Italy where he is very active. He has just completed a sold-out tour of ‘Kemp Dances’ in Italian theatres and continues to create theatre productions, exhibit his artwork and teach.

Nendie Pinto-Duschinsky Premiered her feature film of Lindsay’s production of ‘Elizabeth 1: The Last Dance” in November 2014 in Melbourne and Chile.

This film is the story of a radical artist who began life wearing his mother’s makeup and shoes.